新年快乐 Greeting for the Year of the Tiger 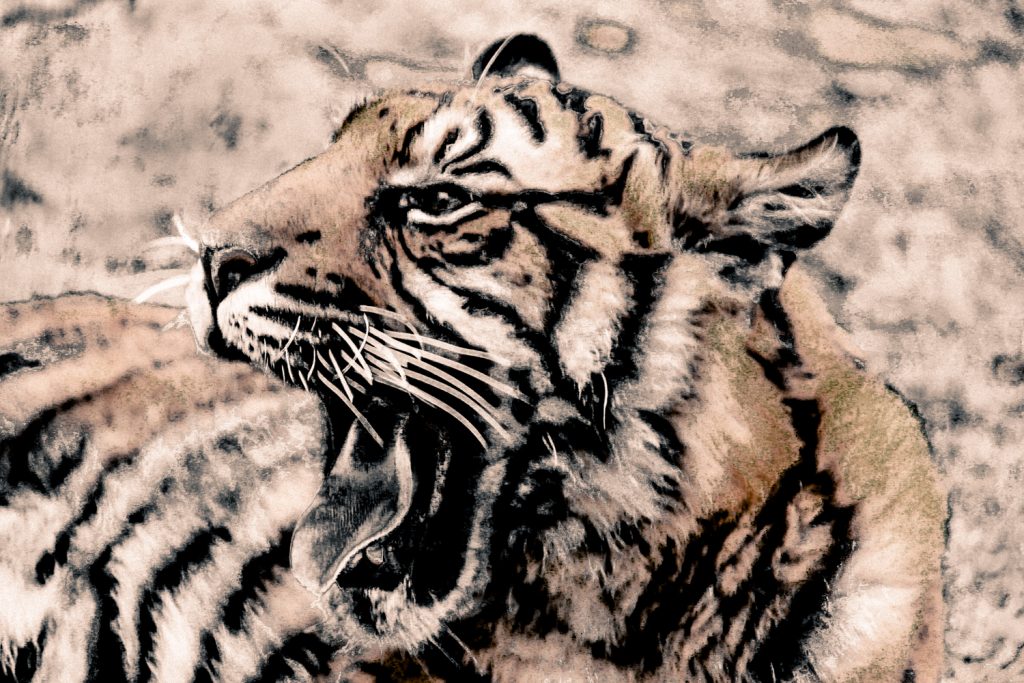 Before it was part of the shengxiao, or Chinese zodiac, the tiger dominated in the cosmologies of several ancient northeast Asian cultures. Its roars and other vocalizations were believed to have the power to summon the wind, essential for communicating with the spirit world.

In China, the tiger was called king of the terrestrial beasts. Symbolically it was balanced by the dragon, king of the aquatic beasts. They were central to the traditional practices of harmonizing energy forces between individuals and their environments, known as Feng shui, (literally “wind and water”). The prevailing west winds of northern China blowing toward the East China Sea may account for the tiger being assigned the role of the guardian of the West. The pairing of these beasts began more than 5,000 years ago. Clamshell mosaics on the floor depicting a tiger and dragon flanked the corpse of a royal tomb at Puyang, in Henan province.

The notion of harnessing the tiger’s power by wearing or sitting on its pelt has resonance across Asia. Hindu Indian holy men called sadhus believe sitting on the tiger’s skin will subdue the ego and give one victory over all forces in the universe. Among northern Iranian itinerant mystics known as dervishes, tiger skins served as prayer carpets and clothing. In Tibet and Mongolia, Buddhist monks sat on tiger skins and tiger stripe-patterned carpets. Chinese soldiers, described in the Shijing, (Book of Odes), dating from the Zhou period (ca. 1050 – 256 BCE), roared as tigers as they advanced into battle, hoping their cries would strike terror into their enemies’ hearts.

As the roars of ancient tigers continue to instill awe, we celebrate the tiger’s many strengths, among them: virtue, tolerance, trustworthiness, courtesy and intelligence. Our hope is that all of us find the tiger’s courage to cultivate these strengths in the Chinese year 4721.