Symbol of the moon

This exquisitely embroidered motif of a toad and a rabbit within the white disk of the moon is one of many treasures in the Textile Traces Collection at the Cotsen Foundation for Academic Research. 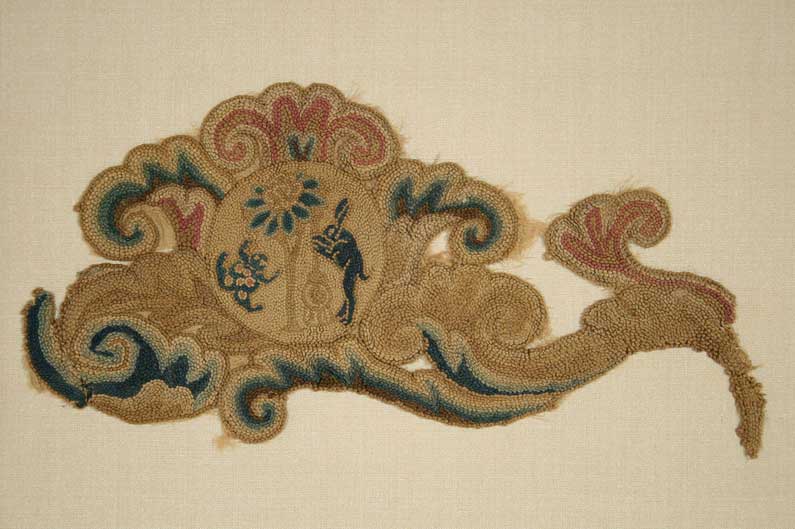 In the 1990s California businessman and philanthropist Lloyd Cotsen gave the large collection of textiles and folk art he had built over a period of thirty-five years as the CEO of Neutrogena to the Museum of International Folk Art in Santa Fe, New Mexico. In addition he funded construction of the museum’s Neutrogena Wing dedicated to its display. Since that time Cotsen has continued to collect textiles that “appeal to my curiosity, to the thrill of discovery of the extraordinary in the ordinary, to my sense of humor, to my love of pattern, color, and texture, to my search for the beauty in form and simplicity, and to my perceiving beauty in and behind the object.” A major difference is that these textiles are nearly all fragments that can be easily accommodated in one of two sizes of storage boxes. Today the Textile Traces Collection includes textiles of many world cultures and time periods and now number in the tens of thousands.

Lloyd Cotsen and folio Early Chinese Textiles from the Lloyd Cotsen Collection, published by Cotsen Occasional Press,. 2015. Both © 2017 Cotsen Foundation for the Art of Teaching.

Recently I examined over 350 examples of from China section of the Cotsen Collection in anticipation of a 2018 exhibition at the Los Angeles Country Museum of Art. I was asked to select 25 pieces for inclusion in the exhibition and write a 5,000 word essay for the catalogue.

The knot stitch embroidered fragment, possibly for a garment, struck me on two accounts. The embroidery is executed in a single type of knot stitch at a remarkably fine scale. Secondly, it appears to be part of the set of ancient symbols that were described as requisite for the ritual attire of emperors.

Chinese knot stitch embroidery, also known as pekin (peking, Pekinese) stitch, or even forbidden stitch in the literature, involves essentially wrapping a half hitch of embroidery thread around a needle and inserting the needle back through the cloth as close as possible to the first stitch through the cloth. 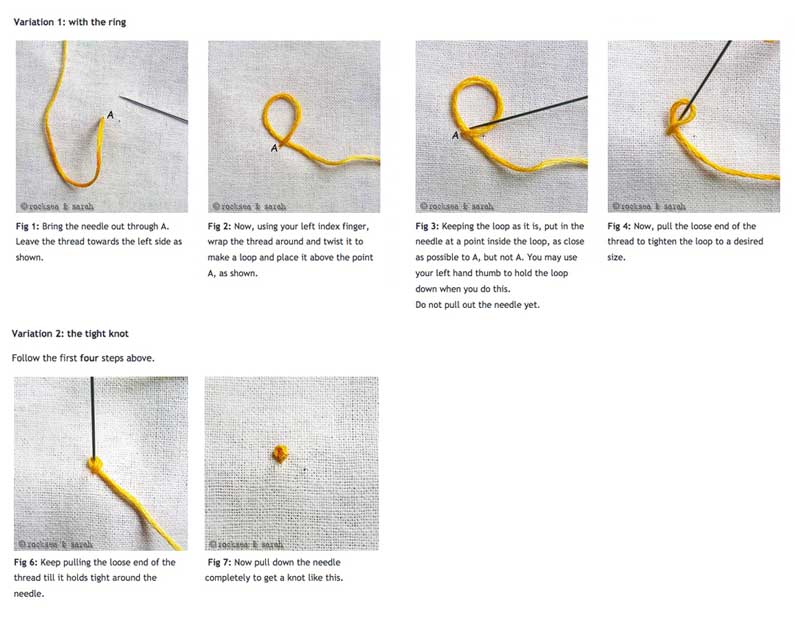 The moon is one of the twelve symbols described in the ancient Shujing (Book of Documents) now believed to have been compiled around 300 BCE as appropriate to ornament the emperor’s ritual attire. The earliest depiction of the moon symbol on a pseudo garment dates from ca. 163 BCE. It is found on the upper “shoulder” area of a “T”-shaped funerary banner that was place on the coffin of Lady Dai, wife of Li Cang, Marquis of Dai. 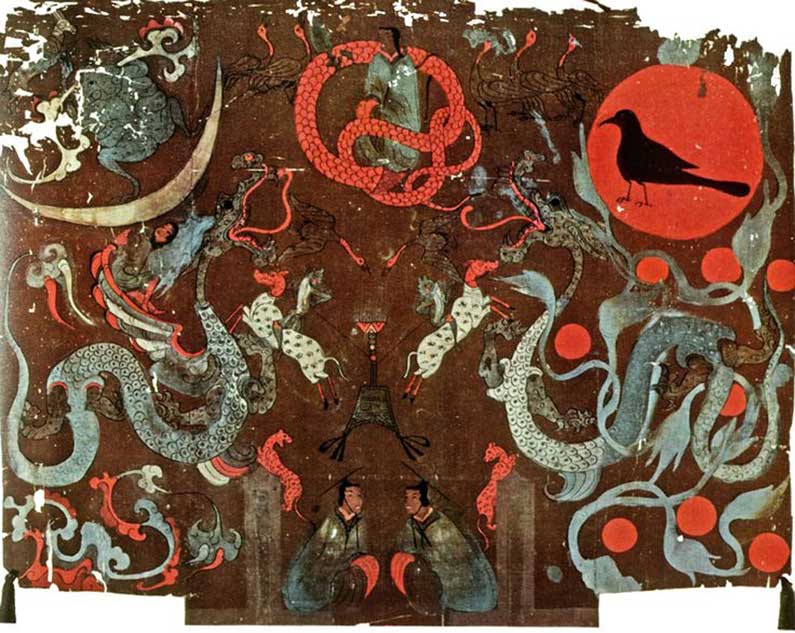 The crescent moon supports a toad, the transformed Chang-O, wife of the archer Yi who is associated with the sun. A tiny leaping rabbit is depicted over the toad. When the ancient Chinese looked at the moon they perceived the form of a rabbit with mortar. Funerary banner, pigment on silk tabby, excavated in 1971 from the Tomb 1, Lady Dai, d. 163 BCE, Mawangdui, Changsha, 2017 © Hunan Provincial Museum.

No actual garment with these 12 symbols survives. Yan Liben’s The Thirteen Emperors, hand scroll includes a portrait of Liu Bei (161–223) emperor of the Shu Han state from 221–223. The Shu Han emperor’s ritual robe is ornamented with the moon symbol on the right shoulder. Although painted nearly a thousand years after the fact, the image depicts what a seventh century artist imagined a third century robe might have looked like.

Although an isolated fragment, the Cotsen knot stitch embroidery is clearly related to another portrait. The figure of Laozi, the founder of Daoism, from a wall painting dating from the Yuan dynasty (1279–1368) wears a robe with the sun and moon symbols on the shoulders 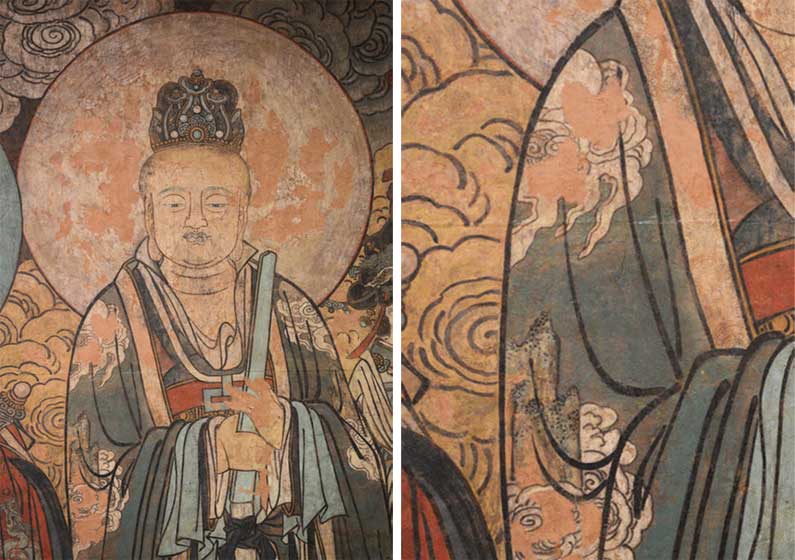 Although the literature on Chinese embroidery claims knot stiches appear as early as the Warring States period (450–221 BCE) on a pair of shoes, Peng Hao, professor of archaeology, Wuhan University and author of the chapter on China’s earliest textiles in Chinese Silks, edited by Dieter Kuhn, Yale University Press and Foreign Language Press, Beijing, 2012, does not discuss them expansive discussion of pre-Qin dynasty embroidery techniques.

Knot embroidery appears with some frequency during the Yuan dynasty. The configuration of the ancient images associated with the moon symbol and its swirling cloud surround link to pictorial evidence of the period. Interestingly both solidly worked knot stitch embroidery and imperial robes with the ancient twelve symbols of authority appear great frequency in the textiles of late Ming and Qing dynasties (16th through early 20th centuries).